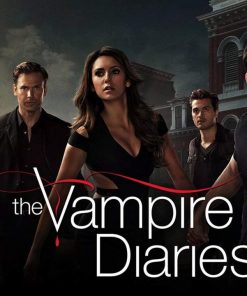 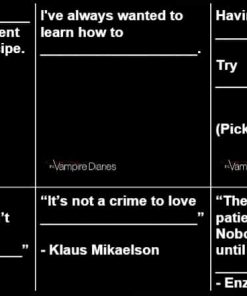 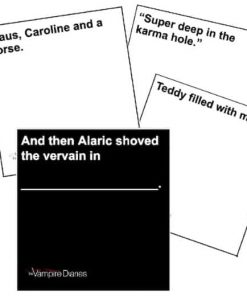 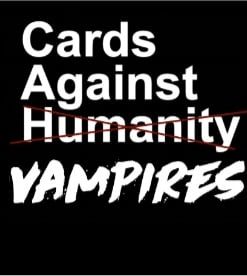 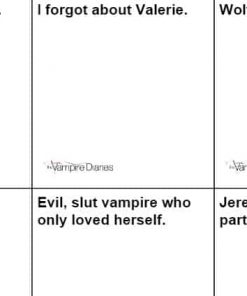 Cards Against Vampires – All about Blood & Vampires

Here’s one of the newest & coolest editions of Cards Against Humanity, specifically made for vampires, The Vampire Diaries, and their fans. You’ll get fascinated by how good laughs these cards bring and let me tell you, now you’ll look at your favorite characters from a new point of view…

Description of Cards Against Vampire Diaries

Beyond all the great editions of Cards Against Humanity, including Cards Against Muggles, Marvel, Disney, Avengers, and many more famous ones, some clever people have also thought of Cards Against Vampires, and good thing they did! This American supernatural teen series, which started on September 10th of 2009, has a total of 8 seasons and has become one of the most successful shows on the CW Network.

I wish we had the power to rewatch the same episodes all over again and not get tired of it. Unfortunately, we’re not supernatural and aren’t able to do that. We’ve found something that helps tho’: playing Cards Against Vampires and feeling like we’re watching the series again, with some twists! If you’re a fan of CAH and TVD, congrats, you’ve found your spot!

Cards Against Vampire Diaries is one very popular card game, which includes combining cards and making jokes all about vampires. Some of them may be dirty, some of them may be dark, but most importantly, all of them are super-fun and make your game night unforgettable. The game shines most when all the players are TVD fans, since the jokes just fit right in, and everyone gets them.

You’ll get to make fun of Elena’s life, Rebekkah’s green dress, Jeremy and him trying to be part of the plans, the obsession over Katherine, and a bunch of lines used on the show. The content’s a bit explicit, so we wouldn’t want you to play with sensitive people, or even worse, with kids or teens. Even if you’re one of them, it’s just a no. As long as you enjoy it…

How To Play ‘Cards Against Vampires’?

The game is as simple as riding a bike, human! There are many ways of playing, and we’re about to show you our favorites! Before starting, make sure you have at least one other person to play with (yes, you may also play CAV with only 2 and 3 players, who undoubtedly should be 17 years or older. Now, we may start, shall we?

All you have to do is give each player 10 white cards, and choose one of you to be the Card Czar or the game judge. When the Card Czar reads one black card, every other player should pick one (or more) white card to answer or fill in the blank, and pass it to the game judge. The latter should now shuffle all the cards and reveal their favorite answer/ the funniest one, which takes 1 point.

Whoever has the most points, wins! Optionally, you may also add drinks to the game, so whoever wins one round (takes 1 point) can make someone drink. This is how we play CAH (and the other editions) as drinking games. On the other hand, if you’re willing to stay sober and get to know your friends more, add some Never Have I Ever rules to it. No worries, instructions on all these ways of playing come with the cards.

The Cards list & Some Combinations about Cards Against Vampire Diaries

Just to prove to you how hilarious the game is, below you’ll find some of the example cards & along with your love for them… 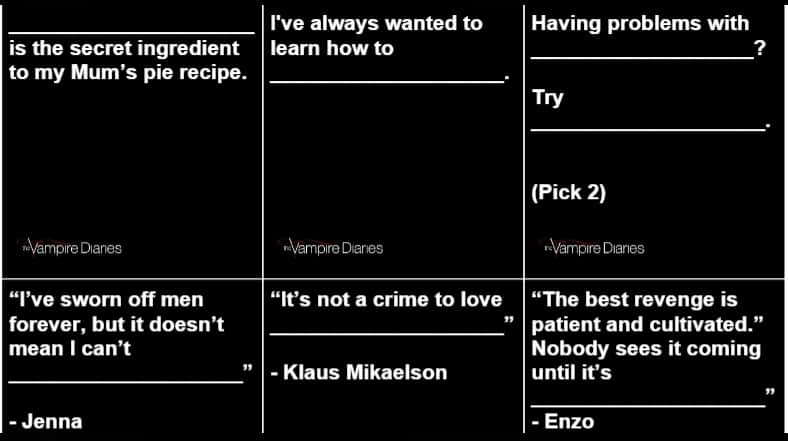 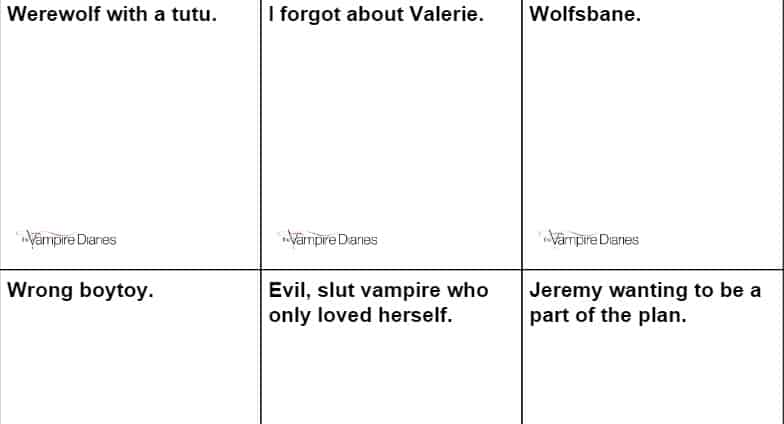 And now, here are some cool combinations you can make:

Black card: Who turned Stefan into a vampire?
White card 1: Drinking until sunrise;
White card 2: A fridge full of blood;

Fellas, there’s one more thing left: printing the cards. As we mentioned, this is the PDF version of the game, and you may have to print them. While you do that, make sure you go to the right printing place, choose the right paper, and cut the card frames carefully… Or you may just read our printing tips and you’ll be fine!

Here’s what 2 of our clients review about Cards Against Vampires:

Have a whale of a time, you lovely sired!

1 review for Cards Against Vampires – All about Blood & Vampires