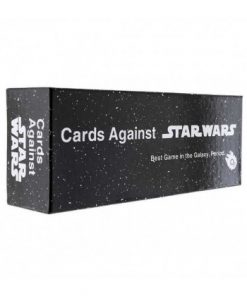 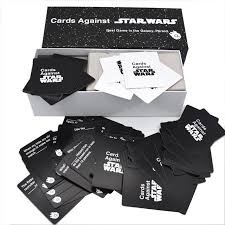 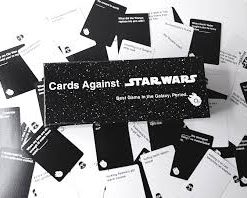 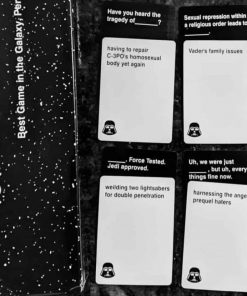 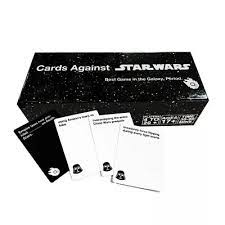 Experience the Best Game in Galaxy with our Unofficial Version of Cards Against Humanity! PDF Version

Are you ready for some fun? We are presenting to you the best game in the galaxy!.

This Cards Against Humanity Star Wars Edition, even though unofficial, will make you laugh so hard that you disturb the galaxy, and perhaps start some galactic trouble with those sensitive to humor.

Cards Against Star Wars is a limited edition card game with the Star Wars theme.

Playing the game will make you relive old movie memories especially if you’re a fan of Princess Leia, R2D2, Obi-Wan Kenobi, and the rest of the crew of the Star Wars movie.

In this Cards Against Star Wars review, you will find out all the details that you’ll need to play the game, and what the cards will contain.

The Cards Against Star Wars box card game is a must-have for any Star Wars fan.

The game can be played starting from 4 to 20 people and it takes 30 to 90 minutes to finish it.

With the rude theme of Star Wars of Cards Against Humanity clashing with the Star Wars universe, the game leads to some hilarious card combinations featuring characters from all the Star Wars movies and classic scenes.

The Cards Against Star Wars box game includes 746 cards (245 Black Cards; 501 White Cards) that you and your friends can utilize during the wildest card-game party you will ever have.

Due to its wildness and the awkward or ‘inappropriate’ questions the game has, it must be played by adult players only. The age of the players should be at least 17 years of age (i.e 17+).

Cards Against Humanity, Star Wars; You can already imagine the combinations.

To put it plainly, Cards Against Star Wars game box consists of a rude and offensive Star Wars humor style.

Therefore, you should choose your game-galactic partners wisely so they can take this sense of humor galactically kindly.

It will finally be your chance to make fun of Anakin, Han, Landos, Obi-Wan Kenobi, and a lot of other characters, with jokes you wouldn’t ever think of before.

For you to get familiar with the content and the language style of Cards Against Star Wars, we will provide you with some real examples of what the cards consist of.

This will assist you in choosing your friends earlier and if you think that your friends won’t be suitable for the game you can try and recruit new Star Wars buddies by demonstrating them the examples below.

Black Card: After blowing up the Death Star the Rebels celebrated with _______”
White Card: Getting an erection in a Storm Trooper suit.
Exposing yourself in front of a school of Jedi younglings.

Black Cards: Becoming a Jedi takes years of _____ as well as ____.
White Cards: Having a quick wank before the Emperor visits.
Exposing yourself outside a school of Jedi younglings.

We demonstrated some card combinations and gave you real examples of how you can respond to a black card with the white ones.

Here are more examples of “Cards Against Star Wars” both black and white cards: 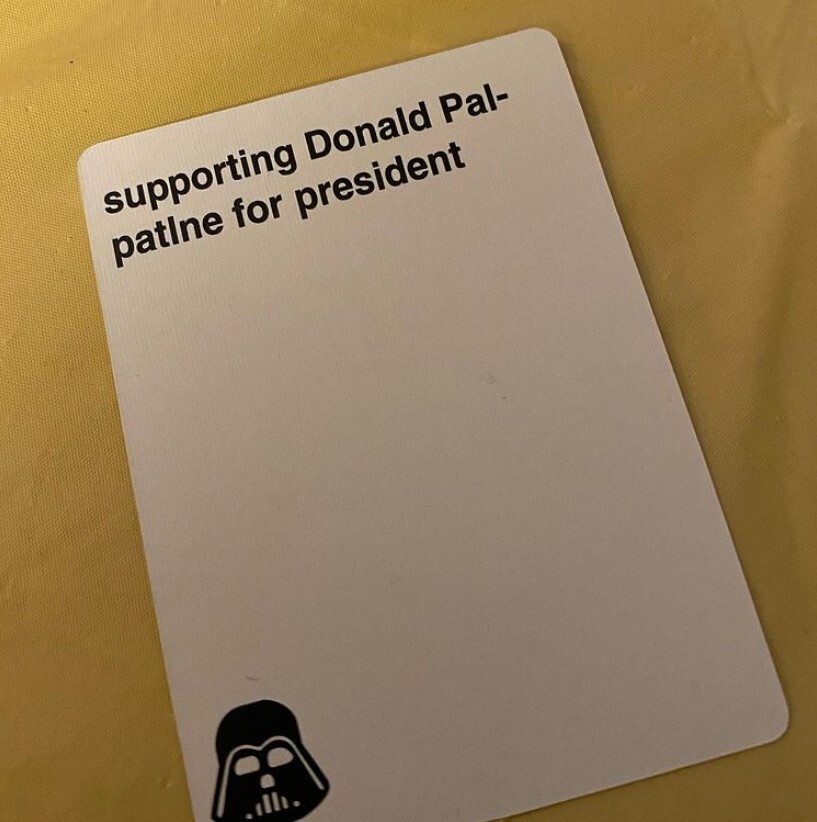 This is what will give you a fun evening of playful behavior with the wildest card-game party out there. In a galaxy far, far, away you wouldn’t want to miss playing the best game in the galaxy, right? Of course, you wouldn’t!

How do you play Cards Against Star Wars?

Have you been wondering how to play the Cards Against Star Wars? Don’t worry we’ve got that covered for you!

Before we start with the gaming process we have to clear things out!

As we mentioned above, the game should be played by adults only.

Those of you who are 17 years of age or older can freely enjoy the hilarious game at your friend’s party or home with your older siblings who enjoy the dark humor of the game.

Cave sex with Ygritte is not even close to the dirtiest card. Those under 17; stay away from this edition!

So, are we ready to learn how to play the game?

Cards Against Star Wars is based on the Star Wars fantasy movie theme and includes dark humor mixed with offensive and rude humor style.

One person distributes the cards to other players at the beginning of the game.

The white cards contain a name, short statement, a single word, or a random list of things whereas the black ones contain a question or a fill-in-the-blank type statement.

The first player takes the first cards from the pile and reads them aloud.

After that, each player chooses one of their white cards and reads it with the black card.

Each player votes for their favorite letter combination and the winner gets to keep the black card. The game is over when there are any black cards on the pile.

Where to buy Star Wars Cards Against humanity?

Cards Against Star Wars is the best game in the galaxy! It is a game of the hours of galactic fun and black galactic humor for galactic people.

You can purchase the Cards Against Star Wars online in our store for only $9.95.

You will learn how to be a Jedi in the dirtiest way possible, make dirty, wrong, but above all hilarious scenarios that could happen only in your imagination.

Buy your Cards Against Star Wars box game and experience hours of fun and laughs with the wildest game- filled with hilarious content and black humor; you’ve ever had!

May the force be with you…