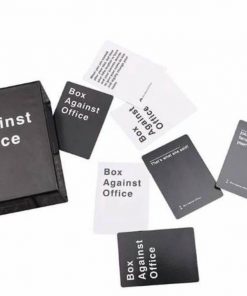 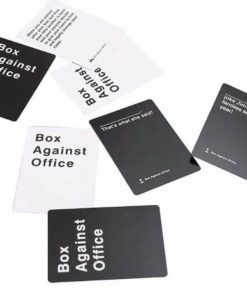 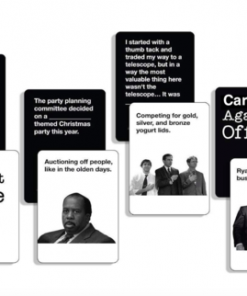 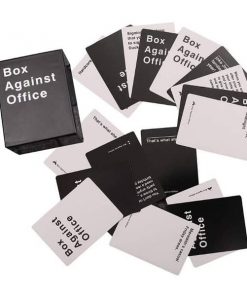 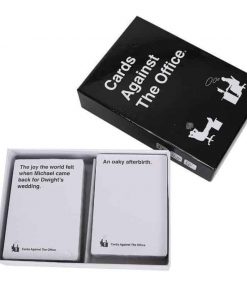 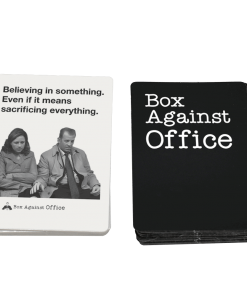 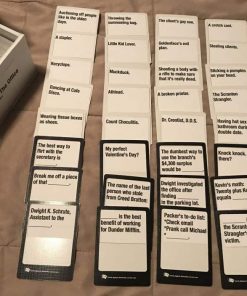 You probably have in mind some Michael dark jokes. They’re hurtful, offensive, we know that :(… Deep deep down, he’s a good human, we truly believe that (although, he hasn’t shown so much of that side, to be honest).

Michael Scott bullying Toby (he’d shoot him twice, even if there’s Hitler in the room), Dwight being the real hero, Jim putting stuff in jello, Angela being a total no-feelings person, Kelly never stopping talking, Meredith trying to kill all her colleagues while driving, and tons more, are gonna be some of the main points in the cards. Funnily, and dirty!

Is it worth it? With this price & quality? I don’t know, that’s what she said!

What does Michael do? Runs away from his responsibilities. And it feels good. But, are we going to run away from our responsibilities, which in our case is to play this Box Against Office? No, we don’t do that!

You can use Cards Against Office as an expansion to Cards Against Humanity, but we highly recommend playing it as a stand-alone, because 352 cards are enough, aren’t they?

If you aren’t a big Office fan (you know, the TV Show, not the office you work in…), then, don’t bother, find another game, such as Cards Against Simpsons, or any other edition you want, they’re all cool…

We’re gonna mention all of the characters in the cards, Michael (we already said that), Jim, Pam, Karen, Toby, Rony, Ryan, Kelly, Stanley, Meredith, Darryl, Angela, Jan (obviously) and so on!!!

You can take the game in your work office, and turn your office into a Dunder Mifflin, which is a total blast! Please, don’t be Michael… Okay, you can be him, he’s cool, we can’t help but love him!

Because of the language, just like every other Cards Against Humanity edition, the manufacturer recommends it to be played by people who are 17 years or older, we don’t wanna teach them things that don’t need to be taught.

Ps. Hopefully the characters don’t play ( or haven’t heard of) this game, we would be in trouble! (they’ll see what jokes we make about them…) Never mind, I’m pretty sure they’d laugh as well!

How Do We Play Cards Against The Office?

The game is not against ‘The Office’, just wanted to let you know that… Yes, the name says that, but.. wait, you still haven’t got the point?

Michael told you to learn the Cards Against Humanity rules… You didn’t? Okay, no worries, we’ll help you out (as always)!

First, you deal 10 cards to each player (4 up to 20+ players) and the Card Czar (the one who judges the cards, and picks the funniest one) draws a black card.

Oh God, my mind is going a mile an hour…

Every player picks their best white card to make the funniest combination with the black card the game judge drew.

Don’t forget that you should pass your cards face down, so the Card Czar doesn’t know who drew what if you wonder if they did any tricks or something!

Next, they pick the funniest card that makes the most sense. The player whose card was chosen gets to keep that card as a point. Of course, the player with the most points at the end of the game wins it!

Ps. Even though the game is recommended for more than 4 people, we also found some great hacks on how to play it with only 2-3 players. This is great, isn’t it?

How Do The Cards Against Office Look & What Are Some Good Combinations? 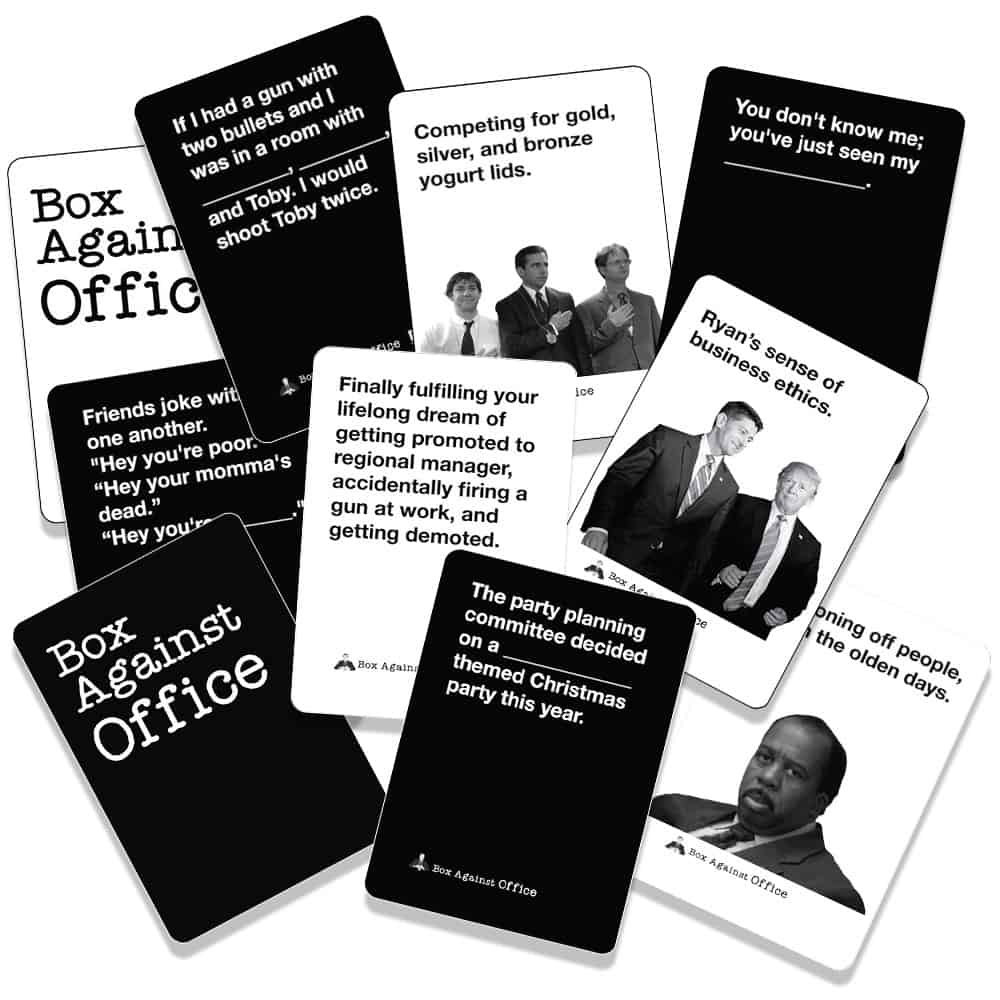 We know you can’t help but be curious! Well, we would’ve been too…

Anyways, we’ll try to show you some of the funny cards, but, noticeably, not all of them, because if we do, what’s the point of buying the game anyway? Yes, no spoilers (okay, maybe just a few). You’re being a little Kelly, she’s always making questions! 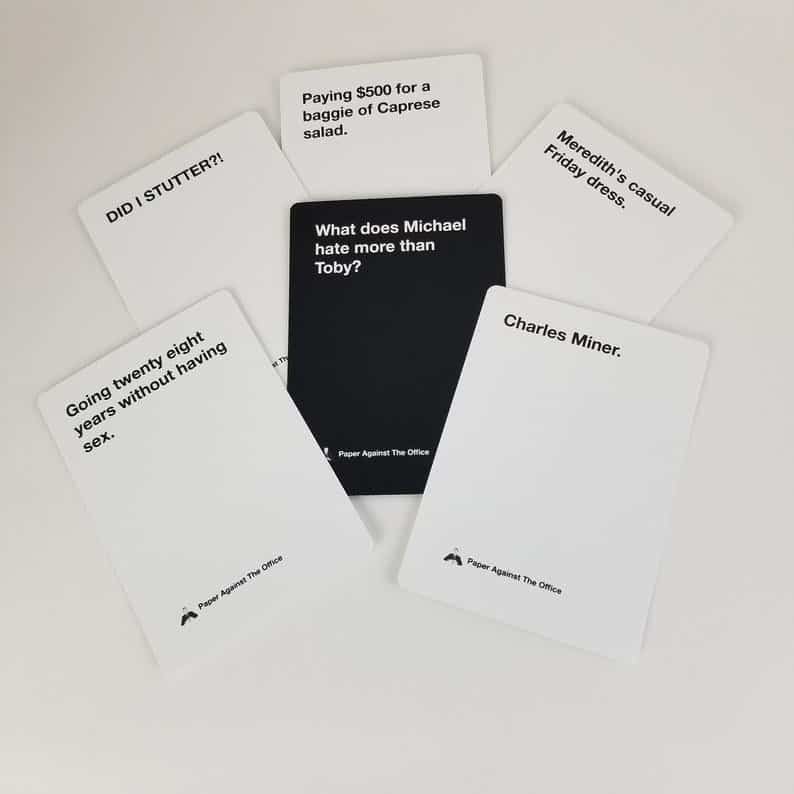 Do you see how hard the job of the Card Czar is? Well, I would probably choose the one with Meredith’s dress. I know it hurts Meredith, but it made me laugh my heart out! 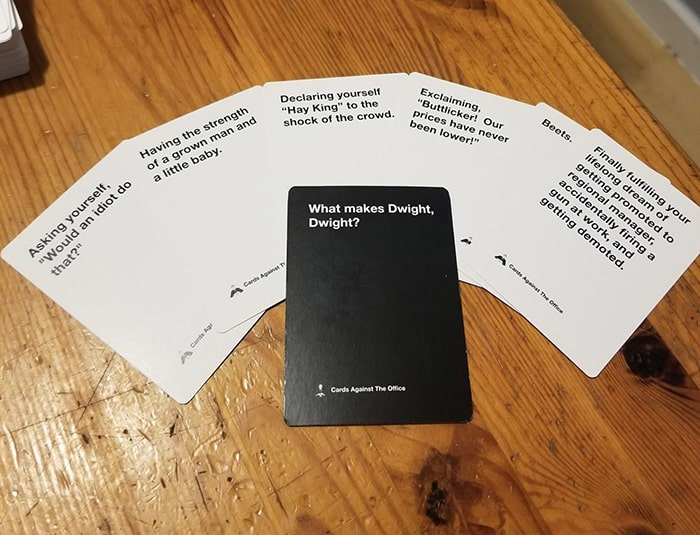 The real question should be ‘What DOESN’T make Dwight, Dwight?’. Oh my Lord, this is such a real struggle. I hope I will never be the Card Czar when all the other players are this funny! Anyways, I love the first one… no, it’s probably the 3 one… no, all of them! 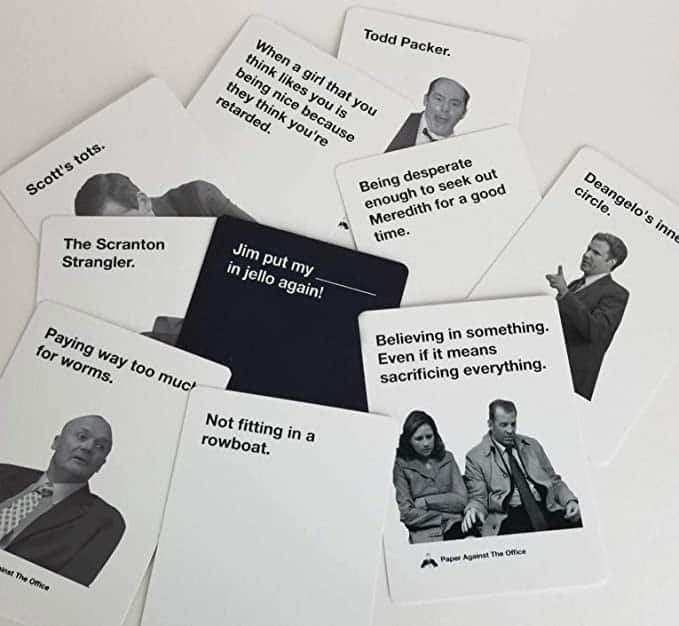 Okay Jim, enough with this jello addiction. No, don’t stop it, it’s hilarious. We love angry Dwight <3 (or even better, angry Andy!) 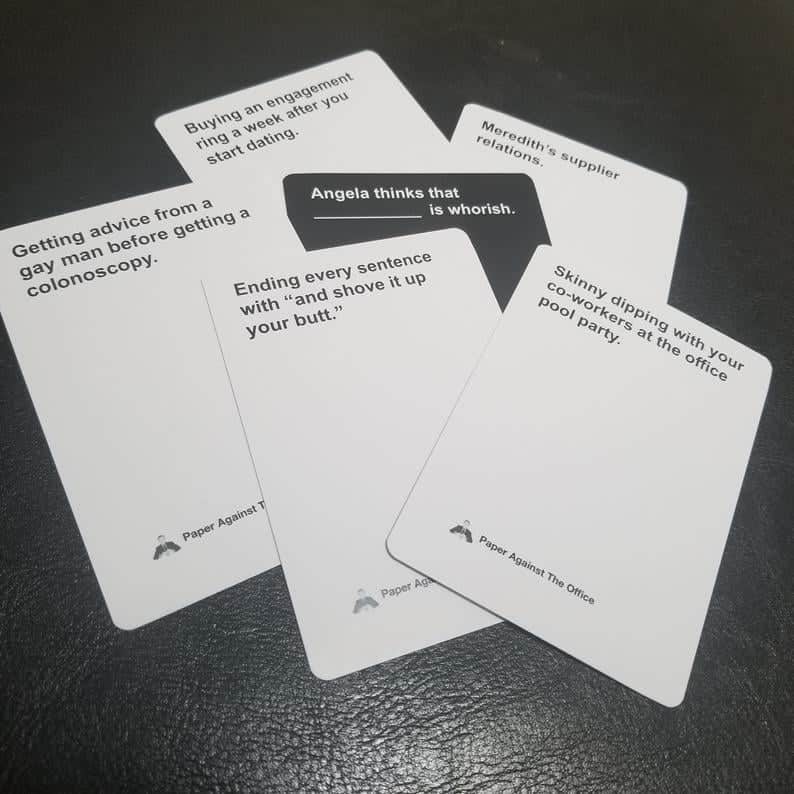 Oh, Angela, you’re at a whole new level. Now, If I had to choose, I’d choose… no, I’d refuse to choose one. They’re all enjoyable, sorry not sorry!

Here are some other combinations (not lots of them, don’t expect them all).

Enough is enough. Buy the game if you wanna see all of the cards. You won’t regret it. You probably have a Bob Vance to pay it for you…

Is It Good Enough, Considering The Humour In ‘The Office’?

What did I mean by this? Let me explain it real quick: Ya know, when you hear such good jokes and humor somewhere, other things just don’t seem funny anymore.

That’s what can happen with The Office… You barely can watch another TV-Show (specifically, sitcom) and think that is funnier than the office, or at least funny.

Why do we love it this much & what are some reasons the game is worth buying? Here are some specific ones:

We have much more to say, but, we don’t wanna make you sleep with your phone in your face, so, enough for now!

Well, sometimes, I start a sentence and I don’t even know where it’s going. I just hope I find it along the way (Michael Scott). And I always do that!

1 review for Cards Against The Office – Buy 352 Cards (Our Lovely Sit-Com) The Office. You Won’t Regret It!