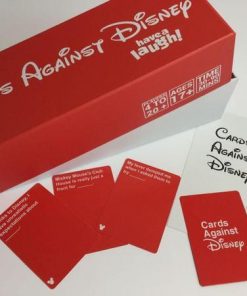 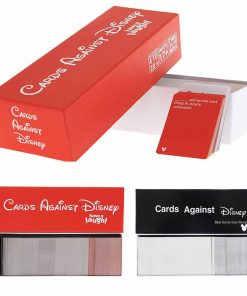 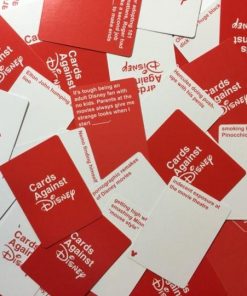 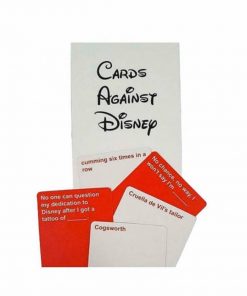 The Cards Against Disney game is taking the market by storm.

This less-than-innocent Disney version of Cards Against Humanity will have you laughing in no time.

Your childhood will never be the same again when you experience the Cards Against Disney Red Box or Black Box.

You may have a curiosity to know the differences between Red Box and Box but the thing that only changes is the color of the box and cards.

The Red Box has 260 Red Cards & 568 White Cards, meanwhile the Black Box has the exact same number, except instead of Red and White, the cards will be colored Black and White (260 Black Cards; 568 White Cards).

By the end of this Cards Against Disney description, you will have the chance to review the product through it and decide if it is suitable for you (considering that its humor can offend the easily offended ones).

You can get the Cards Against Disney Box from several places.

With the CAD Box, you get printable cards – a total of 828 cards.

Disclaimer: While these Cards Against Humanity Disney Cards might make you think they’re innocent by the title, they really aren’t so innocent.

This is not your everyday family game or something that you take to work.

This follows the pattern of Cards Against Humanity – a hilarious adult game.

The Cards Against Disney store version is the same way.

These cards are full of fun for making your favorite Disney characters and songs.

To level the playing field, we think it’s only fair to provide you with a few Disney Cards Against Humanity examples.

This is the perfect way to illustrate what you are in for – Should you make a Cards Against Disney?

Your view of Disney may never be the same again, but it’s all in adult fun.

There is fun to be had by everyone playing.

And take no offense to the Disney switch-up. This won’t be the Disney you remember as a child but one you can laugh about all the same.

The Disney Cards Against Humanity examples will show you that they are filled with raunchy humor that you never would have dreamed up for Disney.

Here are some of the Cards Against Disney card list examples for you.

Do you see my point? Hilarious humor, and definitely not a children’s game!

Here are some more examples of Disney Against Humanity cards. These are all white card examples.

Some cards are just silly things to make you giggle while others are things that just might make you blush.

Here are some black card examples for you as well.

You can’t be offended by these adults-only humorous cards. No matter how much you love or don’t love Disney, you’re bound to find them hilarious!

Before you run out and buy your pack of Cards Against Humanity Disney edition or race to purchase your Cards Against Disney, there’s more you should know.

First, there are the basics. You can play anywhere from 4-20 people and it will take 30-90 minutes to finish a game. This is considered an R-rated game, so players should be at least 17 (just like the movies).

This game is the perfect addition to any adult game night that needs a good laugh.

To show you just how fun Disney Cards Against Humanity can be, we wanted to share some testimonials.

Here’s one from Candace, and one from Carmella, whose mom thought she was purchasing an innocent Disney game.

“So awesome…I actually ordered a couple more after I got the first box and gave gifts to my Disney-loving friends. We are ALL laughing when we play. Great gift!! Lots of sick humor with a Disney twist”.

“My mum bought Cards Against Disney thinking it would be a nice innocent game and it’s really not quite what she expected.” She followed her comment with several laughing emojis. I’m sure it had nothing to do with cards like “Tinker Bell’s tiny titties” or “Tom Hanks repeatedly saying the word moist”.

There are several versions of the Cards Against Disney game.

No matter which version you get, you can expect them to follow the same trend as the original Cards Against Humanity game. Just consider this an unofficial spin-off of the game.

No matter which version of Cards Against Disney you go with, there is one thing you can count on.

Completely inappropriate laughter and giggles all around. With a childhood throwback to Disney and an adult twist, you and your friends will be rolling.

And if your friends live abroad or far away from you, you can invite them to play Cards Against Disney online and make them enjoy Disney world.

You can certainly expect loads of laughter and fun with this adult card game.