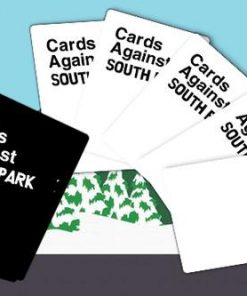 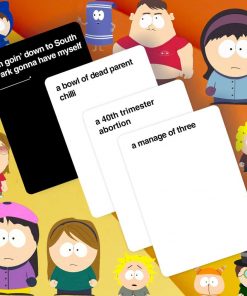 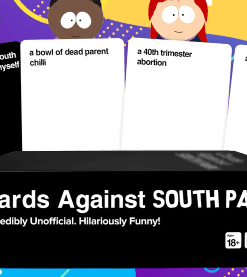 Another hilarious creation just as Cards Against Humanity, the one and only… Cards Against SOUTH PARK! Is it for the kids? Will it offend you? Well, who knows!

-Stan, don’t you know the first law of physics? Anything that’s fun costs at least $8! We know you got it, you smart human!

A series of 309 episodes? What? Isn’t that too much? No, trust us, it isn’t. I mean, if you still doubt that, we assume you haven’t watched South Park, and if you haven’t, you’re in the wrong room, you won’t get the jokes!

Foremost, just like the series, where you know, there is lots of mature stuff, swear words, potty humour, and so on, you know, not appropriate stuff for all people, the cards as well, are NOT appropriate for kids, don’t you make that mistake!

Yes, South Park can be watched by ages 17+, and the card game can be played by people who are 18 (or eventually 17) years or older.

Obviously, if it happens that you know some stuff about Cards Against Humanity, this can be considered an unofficial edition. It’s totally okay to mix it with the main CAH game, if you like the original game, but, honestly, this is meant to be a stand-alone!

Chances are high that you’re a 90s kid, and you’ve watched the game years ago, and this card game is a total blast! You’re about to remember all the famous details, scenes, phrases of your favourite show. What we adore is that there are most of the main characters mentioned, (almost) none of them will feel left out: Eric, Kenny, Stan, Kyle, Chef, Token, Liane, Bebe, and the others, you already know them!

It’s really great for all adults who love South Park… Well, not all of them, let me correct myself. Actually, it’s made for the ones who don’t ‘cry over little things’ (meaning don’t take stuff very seriously) and don’t get offended easily. If you have a good sense of humour, it’s beyond doubt a bonus!

Umm… okay with this introduction part. Now, how are we supposed to play it?

How Do We Play ‘Cards Against South Park’?

Don’t stress out… Just because this is a divided section, doesn’t mean the instructions are hard to follow, we just like to explain everything in detail! As Mr. Garrison would say: There are no stupid answers, just stupid people!

Back to the point, since there are 182 cards, there are enough options to make funny combinations! All you need is some creativity….

The game starts with 4 to 20+ players (a surprise: If you didn’t know, there’s also an option with playing it with only 2 and 3 people), and then continuing with dealing 10 cards to each player…

One player is chosen as the Card Czar, which (we can say) controls the game, and that means they draw the black card, they read the other players’ cards, they decide who’s the winner of the whole game and many features.

To make it as clear as possible, the Card Czar first draws one black card from the pile, reads that out loud, and each player picks their best white card to make the funniest combination. If you ever read the rules for any of the CAH games, you know that you should pass the cards face down, so, the game judge won’t know who played what. The fairest way possible!

I bet you know what’s next! The Game Judge (or you can call it in any name of South Park characters to make it more fun), picks the funniest white card he/she was given.

Every player whose card was chosen, gets to keep the black card as a point. At the end of the game, whoever has the most points, wins!

Yes, there are some extra rules, such as make a haiku and some other stuff related to that, but, we don’t need that for now. I mean, if you’re a fan, you would’ve already known that! I don’t make the rules. I just think them up and write them down (Eric Cartman <3).

Yes, it’s pretty simple, and pretty fun. Actually, it’s more than that. It’s as amazing as the scene where.. Nevermind, they’re all awesome, I can’t single out one!

How Do South Park Cards Look? 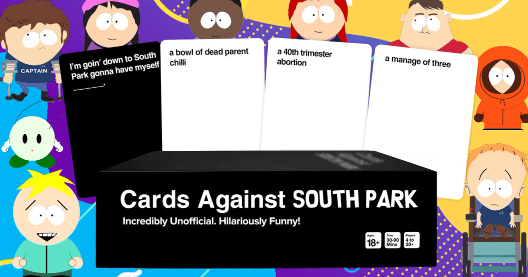 The cards are hilariously funny. You already got that. But, that little sparkle that makes the game outstanding is how you combine the cards. That’s the whole point of the game dude!

Firstly, here’s an example of a combination, but let me tell you something without starting: we will not show all of them! Let it remain a surprise until you actually get the game! 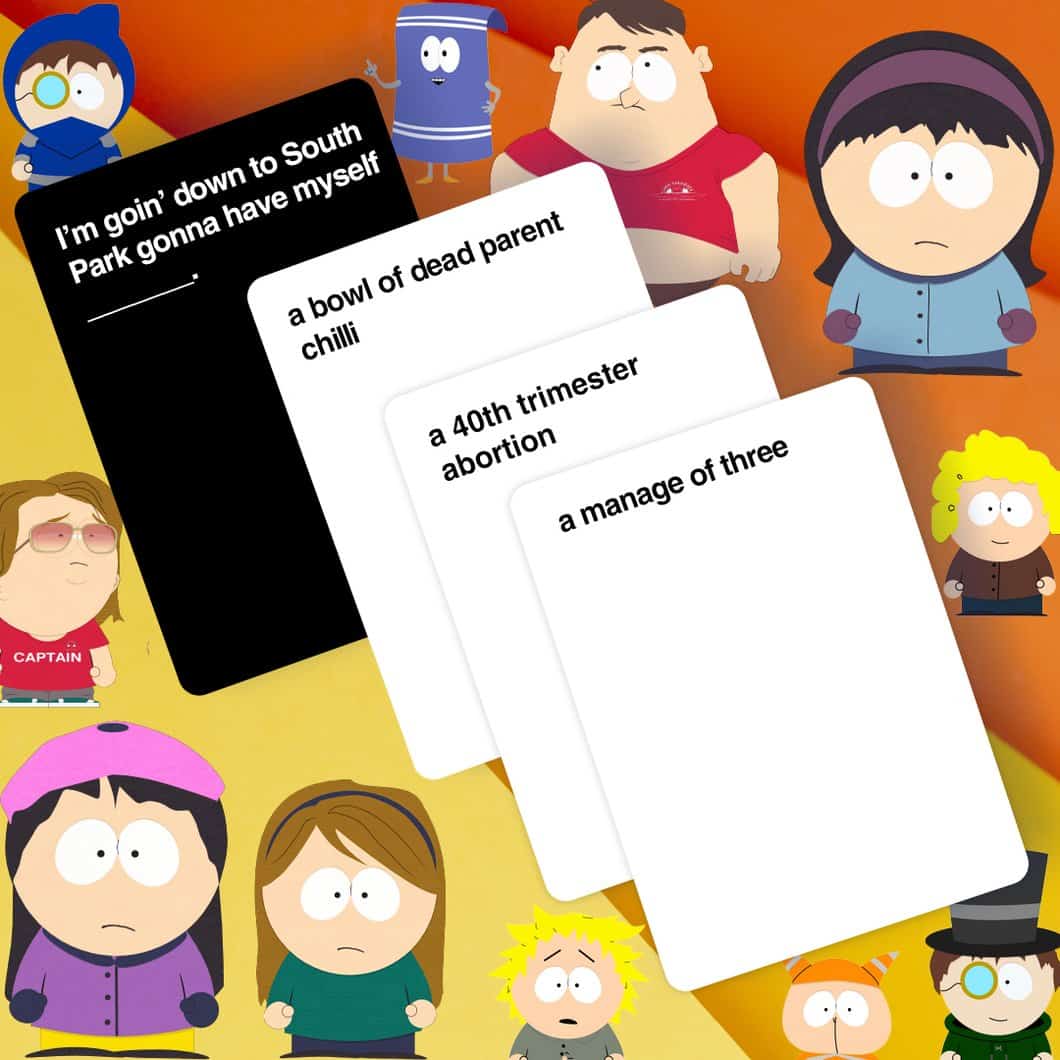 Is this dark? Yes, a high level of darkness. But yeah, it’ll make you laugh your heart out. Ps. What would you rather do in South Park?

We know you’re exploding out of curiosity right now. It looks fun, right? Wait, no, it doesn’t look. It IS fun (or more than fun, if there’s a word for it)! To help you visualize the game, these are some of the combinations you can make with white & black cards:

Black card: Butters was grounded for ________.
White card 1: getting sand on your vagina;
White card 2: putting Towellie through the spin cycle.

These were like 3-4 basic combinations, or whatever. You’re gonna have to figure out the others yourself, and make them as funny as possible, we know you’re a meme Queen/ King!

How To Print These Cards In The Best Way?

As you already know, this is the digital version, which means that after getting the PDF, you’ll have to print these cards. But, how to make sure you’re not going to ruin the printing? As always, we have a solution, which is these tips:

Just to be transparent with you, there are some extra printing & cutting cards tips, but anyways, we’re gonna talk about it another time (don’t forget to remind me!).

Is there anything else to say? Not really, except wishing you have fun (no doubt you will) while playing the amazing ‘Cards Against South Park’!

Family isn’t about whose blood you have. It’s about who you care about. And that’s why I feel you guys are more than just friends. You’re my family!