Cards Against Simpsons – 1072 Cards For Sale

It’s the Simpsons. I mean, come on!! Just when you thought that this game couldn’t get any cooler, you find out that there is a Simpson-themed edition.

719 cards all about your favorite animated comedy, not just any cards though.

The cards this time are against Simpsons, and if you’re familiar with the cards against humanity humor, you know that most of the time it isn’t appropriate for people under 17. This is one of those editions – 17+.

A combination of the favorite animated comedy, with the favorite card game ever. It is the Cards Against Simpsons.

You wouldn’t want to miss this one. The Simpsons are already hilarious, you can now imagine it combined with the dark, dirty, twisted humor of Cards Against Humanity.

This edition (unofficial) is all about Homer, Lisa, Bart, Marge, Maggie, and other of your favorite characters from your favorite animated comedy The Simpsons.

If you’re already familiar with Cards Against Humanity, you’ll know that their humor is considered not acceptable by people that are sensitive or easily offended.

Well, this is just as dark, dirty, twisted, and hilarious. That’s why this is another one of the 17+ editions. Not suitable for kids!

How to Play Cards Against Simpsons?

Rules are just the same as the rules of Cards Against Humanity.

The Black Cards contain a question or require a fill-in-the-blank. They’re read by the Card Czar of the round. One of those is read per round.

The White Cards are the ones to answer/fill-in-the-blank for the Black Cards. You get ten (10) of those.

Like in Cards Against Humanity, the first thing to do is decide who will be the Card Czar of the round.

By the way, a Card Czar is the guy or gal that reads the Black Card for the rest of the group. Also, they’re the boss for that round because they choose who the winner is. They can be called the judge.

Remember the new round, the new Card Czar.

While the Card Czar reads the Black Card, the rest of the group gets 10 White Cards. Each of the players chooses one of their 10 White Cards in their hand.

After each chooses the cards, each places their cards faced down on the table.

Now it’ll be time for the Card Czar to read each card combination, and judge which one is the best/funniest.

The game can last up to 90 minutes. But keep in mind you can play as much as you wish since you’ll get different combinations each time

You will find card examples and card combinations below. So you can know what it is about. 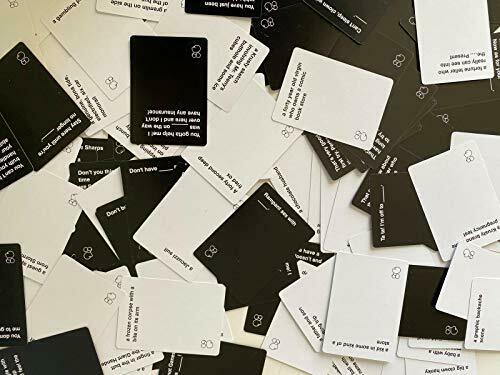 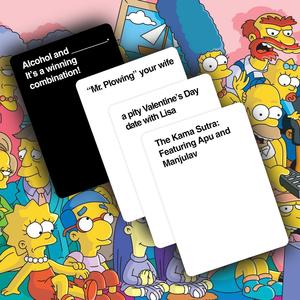 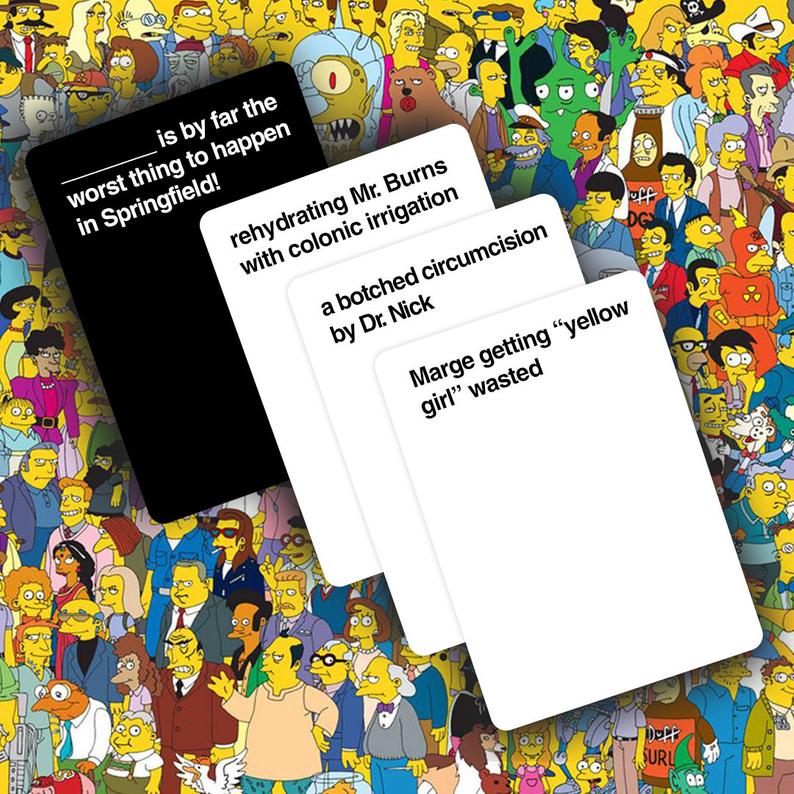 Black Card:
Alcohol and _______ is a winning combination!

Well, these are a few out of 1072 cards this edition has. You can enjoy these cards, the fun, the laughter, and everything else this edition comes with, by purchasing it online on Amazon for $34.99.

1 review for Cards Against Simpsons – 1072 Cards For Sale