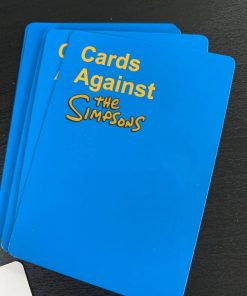 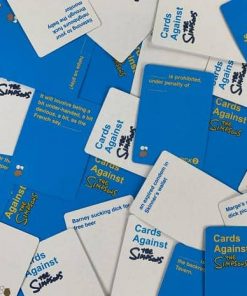 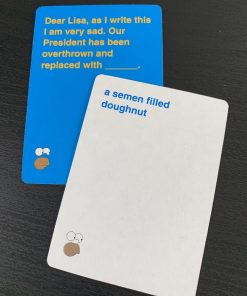 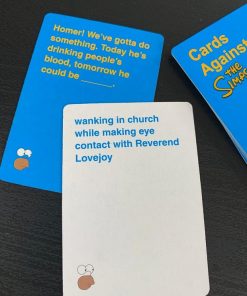 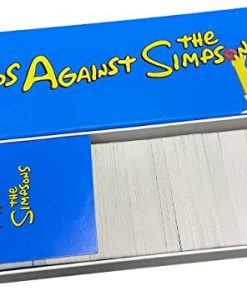 Cards Against The Simpsons – The hilarious (sometimes offensive, let’s be honest) card game! All about our favorite Springfield Family, our lovely Simpsons <3….

The Simpsons guessed about Donald Trump President, about 2016s Nobel Prize Winner, faulty voting machine, smartwatches, they guessed that Disney will own Fox, simply, they predicted the future. What else do you need?

I mean, Cards Against Humanity random cards, and all the other CAH expansions & editions are pretty hilarious, but, c’mon now, hands down, this Simpsons Edition is a whole new level! You know, like, it can’t get any cooler!

Unfortunately (or better say, thank God), this game is designed for adults only. Because of the cards, and you know, all the content inside, the game is recommended for ages 17 or older.

As you read about earlier, this edition has 1072 cards, and that means what? Yes, you guessed it! It is made for a larger number of players. I mean, there’s no problem if you play it with 2 or 3 players, but, obviously, the more people, the better!

Just imagine this: You already know how funny The Simpsons themselves are. Now, make a combination in your mind of the Simpsons with CAH hilarious, funny (let’s not forget dirty) cards. Yeah, no, you can’t imagine it, our brain can’t handle this amazingness, understandable….

The Card Came Against Simpsons, this astonishing fan-made edition, contains jokes about all the members: Homer, Bart, Maggie, Apu, Ned, Groundskeeper Willie… You know them, why am I mentioning them anyway?

Did I tell you that you shouldn’t make that mistake and play it with kids? They haven’t watched the Simpsons with that eye! You’ll understand what I’m saying when you take a look at the cards!

What Are ‘Cards Against Simpsons’ Rules?

Is it complicated? No, definitely not. Even a child can play it. But, in our case, they can’t. I ALREADY told you that dude!

If you know the Cards Against Humanity rules, everything’s about to be way easier! Even if you haven’t heard about a single CAH game, chill, we’ll explain everything in detail!

Every player is dealt 10 cards. You can choose if you all want to be Card Czars, you know, you take turns, or, there’s a volunteer player that wants to be the game judge the whole game.

Oh, wait, it may have gotten confusing… The Card Czar is the player that is the game judge, specifically, chooses the favourite/funniest card.

Back to the point, the Card Czar draws a card from the pile, and reads it out loud. What’s every players’ task? To pick the funniest card from their hand pile, that they think matches best the card game judge chose.

Important: All the players should give the card face down, so, no one will doubt if the Card Czar chose that specific card based on some other personal preferences.

Next, the game judge picks their favourite, and whoever that card belonged to, wins one point, and obviously keeps the card as one point.

Long story short: Deal cards, make someone the Card Czar, draw a card from the pile, everyone chooses their funniest cards, and the Card Czar picks their favorite!

You can also do something extra: The game host can make a little prize for the winner (you know, even something symbolic, just as a good memory), and give them to whoever wins the game. On the other hand, the loser takes shots (for example, if he/she collected 1 card only, they drink one shot!)

So, turning the regular Simpsons Cards Against Humanity into a drinking game just adds the sparkle! 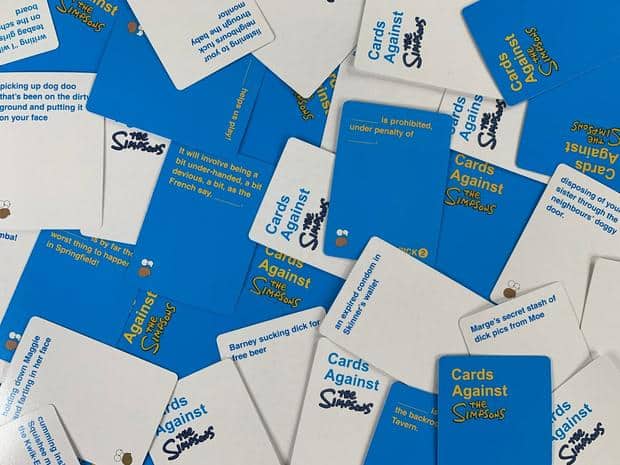 Y’all remember when we mentioned that this is definitely not a game for kids? Well, you’re about to prove that. Here are some card examples: 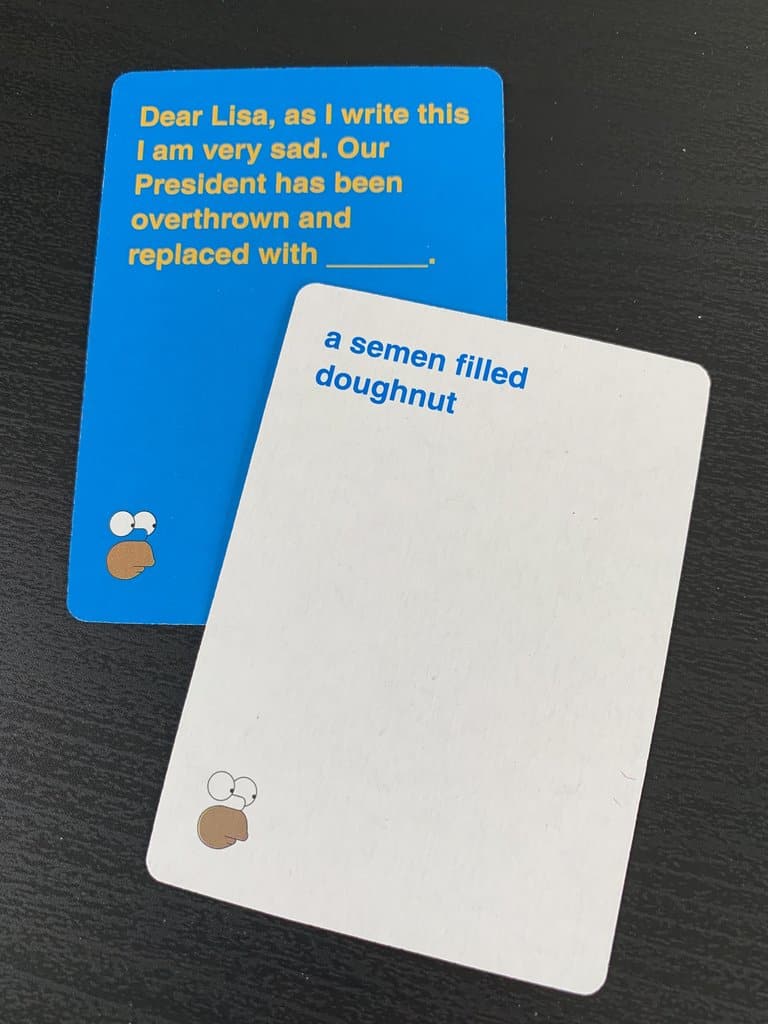 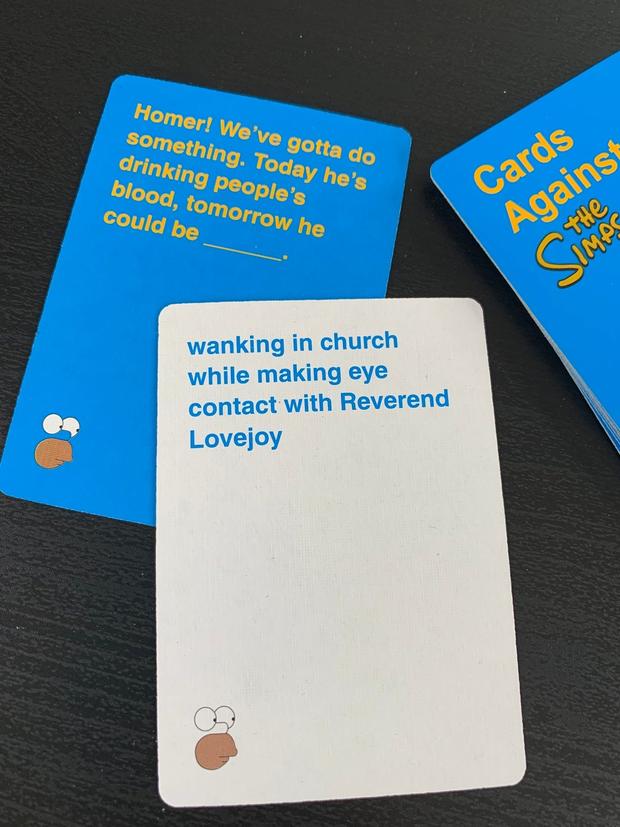 Since you can’t help but be curious, here are some more combinations:

Okay, these were enough, I’m not going to show you the whole set!

No, they don’t like it. They LOVE it. The adults, of course. You probably read the cards, as you should!

It is an amazing sitcom, expressed in good, dirty, offensive, horribly funny cards. But of course, your combinations are the cherry on top, you know, they make the game fun. If you don’t know how to match the cards, where’s the point?

Anyways, for our word of honor, this is what Simpsons fans say about this Game Against Simpsons reviews:

Now, judge the game yourself, you funny, dirty, (but mostly) lovely people!