Skip to Content
Home Shop Products Rick and Morty Cards Against Humanity 767 Cards Buy
View cart “Cards Against One Direction Game 712 Cards” has been added to your cart.
Sale!

Game Against Rick and Morty is an unofficial edition of Cards Against Humanity, with 767 themed cards based on the “Rick and Morty” series.

Robot: What is my purpose?
Rick: You pass the butter.
Robot: …Oh my God.
Rick: Yeah, welcome to the club, pal.

Game Against Rick and Morty is an unofficial edition of Cards Against Humanity, with 767 themed cards based on the “Rick and Morty” series.

Rick and Morty started back in 2013, and it is still one of the top watched, favorite and famous sitcoms.

It is a dirty and hilarious version of your favorite sitcom put into playing cards, Cards Against Humanity style! This being said, you probably already know that it means this is a 17+ game.

The cards’ content is hilariously dirty, so much that you won’t see the series the same way again.

If you haven’t seen the sitcom, you’ve seen the memes at least.

We’ve been laughing with the adventures of Rick and Morty, now it’s time for us to recreate those adventures and laugh harder.

It is a perfect game to create inside jokes with your friends and carry them away after playing the game.

As you might already know, Cards Against Humanity is absolutely simple to play and very easy to learn.

This is an edition of it, so the rules are just the same. However, there are a few extra things you want to keep in mind before we remind you of the rules:

1. There are Pick 3 Cards.
In this case, you draw two cards instead of one, and as it says on the card, you pick 3 answers (White) cards.

Now that those are out of the way, we can go through the simple rules.

The Blue Cards represent the Black Cards, which are the fill-in-the-blank or question cards.

While the White Cards are the ones you use to answer or to fill the blanks to Black Cards.

You choose the Card Czar of the round, of course.

Then, you start with each player getting 10 White Cards and the Card Czar reading the round’s Black Card.

All of you pick the answer card you wish/think is the best fit, and place it on the table faced down. You shuffle them and finally, the Card Czar reads all the combinations out loud and decides who is the winner for that round.

The new round, new Card Czar. Repeat until you’re tired of playing.

You will find some card combination examples of the Game Against Rick and Morty, below. 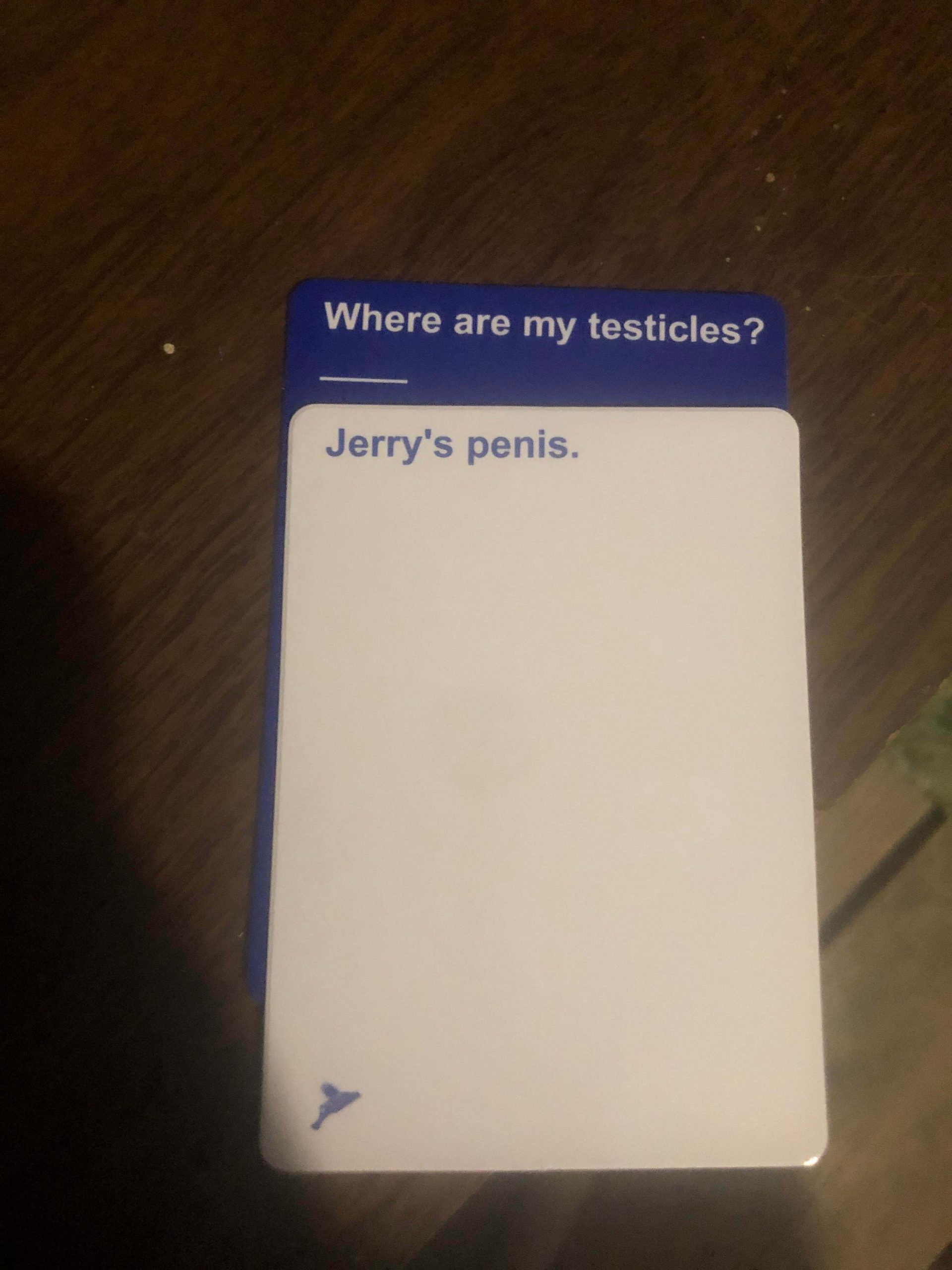 1. Being a pussy.
2. Love potion.
3. Misplaced testicles.
4. Morty being attacked by an anthropomorphic Jelly bean.
5. Fart.
6. Jerry’s crumbling marriage.
7. TINY RIIIIIIIIIIICK!
8. Where nothing gets stuck in your lips.
9. World domination… by dogs.
10. Morty’s endless sexual frustration.

Here’s how we could combine a few of them:

Blue Card:
Rick and Morty travel to a dimension where everyone is ______.

White Card:
Being a pussy.

Blue Card:
Nobody exists on purpose. Nobody belongs anywhere. We’re all going to die. Come watch _________.

There are over 700 cards, and these were only 3 combination examples. It’s time for you to decide what’s the next adventure gonna be.

The fun, the waves of laughter, the cards, and the adventures you might create with them can be purchased here in our online store for only $9.95.