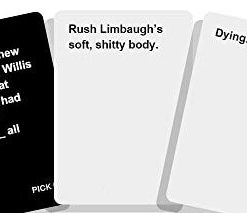 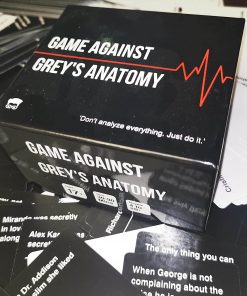 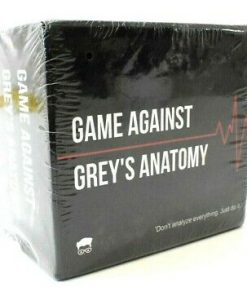 Game Against Grey’s Anatomy (you wouldn’t be wrong if you named it Cards Grey’s Anatomy) is a card game made for your favorite medical drama series, you future doctors!

To be honest, we learned lots of life lessons just by watching it, such as: you’ll always need your people, if you make a mistake, you move on, admitting you have a problem is the first step to recovery, it’s okay to lace your job above anything else, love will always come, and the list goes on…

It’s truly inspiring, motivational, especially the characters, they are faced with life-or-death situations, and they never give up & always do their best. Now, don’t be fooled and think the cards are as innocent as this tv show’s short description.

The cards are quite dirtier (and darker sometimes) than the tv show, it’s like making fun of all the characters, including here Meredith, Derek, Alex, Jackson, Addison, Izzie, Christina, and… you already know the crew, I don’t know why do I keep mentioning!

They make such a refresh of most of the episodes, and also create such a great connection between you and your friends, which are Grey’s Anatomy’s fans, and make you all laugh hard with all the extraordinary jokes. You’ll see later I have a point!

If you’re not a big fan, even though you can play, it wouldn’t be that fun, you wouldn’t know how to match the jokes with the characters, but it would create a good atmosphere anyways!

How Do You Play & How Do The Cards Look?

If you paid attention to the product details, you read that Game Against Grey’s Anatomy is a Cards Against Humanity unofficial edition, which means that there are applied the same rules as in CAH.

There should be 4 or more players, that’s up to you, but always, the more people, the more fun! One of the players would be the Card Czar, or the game judge of one round, or the whole game, that all depends on preferences. Each player is dealt 10 cards, while the other cards are used to create a pile that should be placed in the middle of the table.

The Card Czar draws a black card, or in other words, a question card, and all the other players pick their funniest white card to make the best combination with the black card the game judge drew. After everyone has made their choice, the Card Czar has to announce the winner of that round.

Even though there are some more extras, for like, experts of the game, these were the basic rules of Cards Against Humanity, Grey’s Anatomy, and every other edition or expansion related to them!

In this edition, we will call the Card Czar Queen Meredith, it’s way funnier. Keep that in mind!

I think we’re clear with the rules, now, let’s see some of the cards, we know you’re dying to see them!

The third one is unbelievable disgusting, but, do we care? No, that’s where the fun is! Being weird & funny & cringe with each other. Queen Meredith had a very hard job while choosing the winner of this round. They all seem pretty funny to us…

Imagine being that smart that you can make this hilarious combination! Of course Cards Against Grey’s Anatomy requires lots of creativity, and a good sense of humor, if you want to win, of course!

We showed you some of the cards, we’ll leave the others to your imagination, but anyway, here’s a list of some of the other cards, which will help you know what you’re buying:

Where’s the point of buying the game where you already know all the cards? No point at all! That’s why we won’t spoil it anymore, you’ll find out all of them while playing…

A Conclusion & What Do People Say About ‘Game Against Grey’s Anatomy’?

We have already shown you all the details, Queen Meredith, game content, lots of the cards, combinations… pretty much this is it. Let me mention some important details one more time before we leave:

It also makes a great gift for the fans, and actually, this is what we did. We sent some copies to some fans of Grey’s Anatomy, and we both had benefits: they had extremely fun, and we had the chance to test our game. Of course, they gave us reviews:

Did they say it all, didn’t they? Well, don’t analyze everything. Just do it!

1 review for Buy Game Against Grey’s Anatomy – 300 Cards For All The Medical Tv Show Fans!