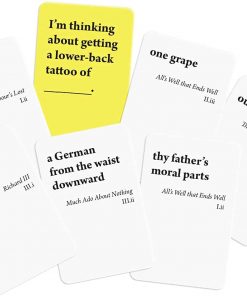 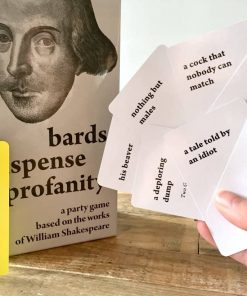 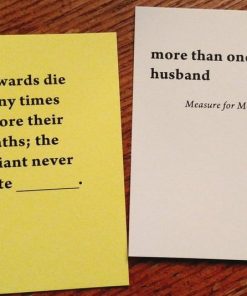 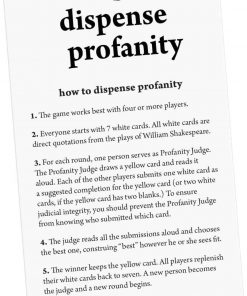 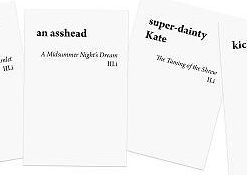 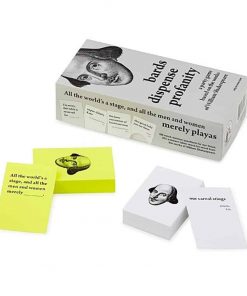 Let’s head back to the 16-17th century, and talk a bit about one of the most powerful poets of all time! Bards Dispense Profanity is a card game where the content is all about Shakespeare and his famous poems about life, love, mystery, death, and more.

“To buy another card game or not to buy, that is the question…” – Shakespeare

We’re used to having lots of unofficial Cards Against Humanity editions, which, hands down, bring tons of laughter to the parties, and that is their mission, to make everyone laugh. This Shakespeare-themed edition is made for bookworms, especially those who have read most of the works of this famous English poet.

Yes, we may say that the game style is similar to CAH, with all the question and answer cards. When we are at the cards, this game has 475 cards inside, divided into 100 serious questions (or fill-in-the-blank) cards, and 375 answer cards, which are quotes and lines, word by word, from Shakespeare’s writings and plays.

In general, 38 of his plays are included in the cards, such as Romeo and Juliet, Macbeth, Henry VI, Richard III, All’s Well that Ends Well, Love’s Labour’s Lost, Much Ado About Nothing, The Merchant Of Venice, and the list goes on. Every quote written on the card has the source (from which poem) below it, which also is a good reminder for the players.

Even though the game can be played by anyone, even if they haven’t read any single writing of Shakespeare, all they should be aware of is the rules, but, anyway, it doesn’t feel the same when you don’t have a clue what that line means. It would be like playing another random game. So, bardalator, it’s your time to shine!

How Do You Play This Card Game?

What you should know first, is that this card game works best for 4-20 players. Anyhow, there’s also a way to play it with only 2 or 3 players, but, based on our experience, when it comes to games similar to Cards Against Humanity, it’s always the more people the better.

Even though, to be honest, the content isn’t as dirty and too-adult as in the other CAH style card games, it still has some words which are not recommended for people under 17. I mean, I don’t think people younger than 17 can get Shakespeare’s poems but anyways…

First of all, everyone should be dealt 7 white cards. The yellow cards pile should stay in the center of the table. For each round, one of the players should be the Profanity Judge, which is the same thing as the Card Czar. If any of your friends aren’t in the mood to play, you know, deal with choosing a funny card and all that, they can be the Profanity Judge for the whole game.

Next, the game judge draws a yellow card from the pile and reads that out loud. All the other players choose one (or two cards, if the yellow card has two blanks) as an answer to the yellow card, to make the funniest combination of all. It is noteworthy that the players give the cards face down to the Profanity Judge, just to be sure that the judging is right.

Next, he/she tells what was his favorite white card, and this is how the winner of that round is announced. The winner keeps the yellow card of that round as a point, and at the end of all rounds (it can last as many rounds as you want), whoever has the most yellow cards wins the game.

Here’s something extra for you: If you’re all legally allowed to drink, 21+ ages (or even if you aren’t but you all want to drink, we get that) you can turn Bards Dispense Profanity into a drinking game, all you gotta do are some tiny changes, and that’s how you’ll get a bit drunk! 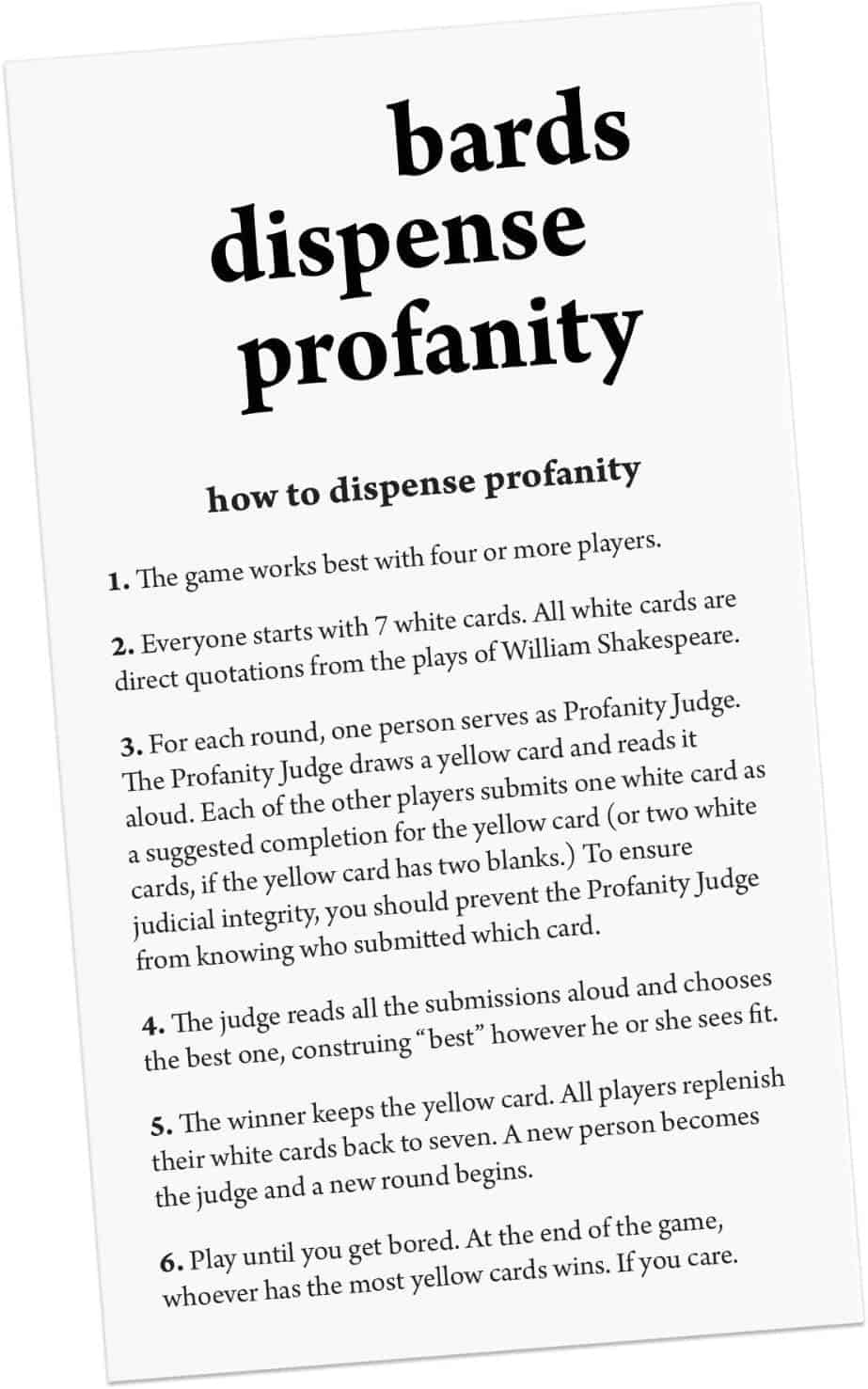 How Do The Cards Look?

I bet you hardly waited for this part, and that is understandable! Once again, this Shakespeare-themed card game has 475 cards inside, 100 yellow ones, and 375 white response cards. Each card has a drawing of Shakespeare in the back:

They look artistic, don’t they? Oh, and, this is how the box looks once we open it, just so you can see the cards size and the inside of the box: 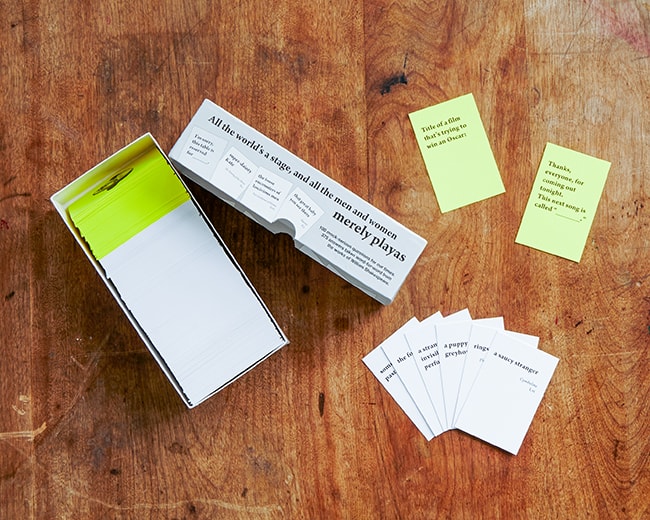 So yeah, since making the best combination is the point of this game, here are some of the best card combinations (ps. we know you’ll do better): 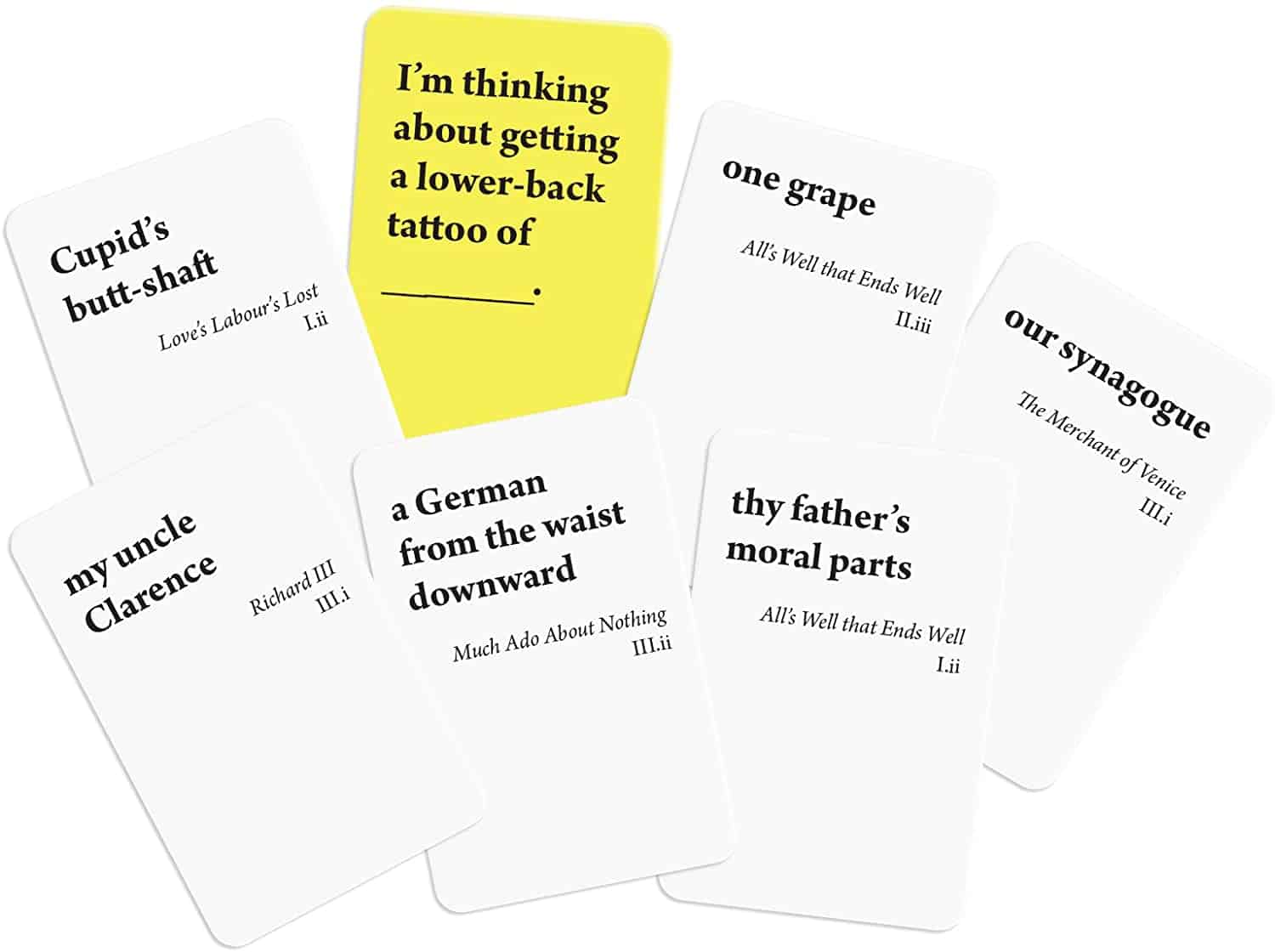 A lower-back tattoo of a german from the waist downward? How evil is that? It’s funny though, and that probably would’ve been my favorite if I were the Profanity Judge… 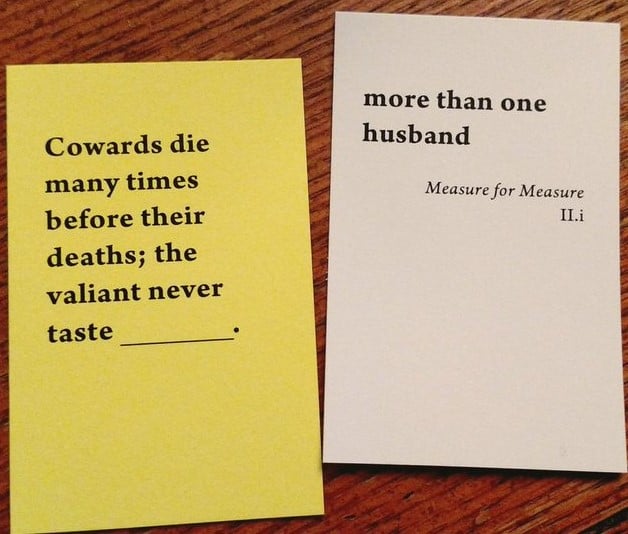 No words are needed… This combination & this photo tells a lot!

We’re sorry too, this table is reserved for an asshead…

Just to give you more ideas, here are some more possible combinations:

One more time, the white cards are from Shakespeare’s works, while the yellow ones include lots of random topics, starting from tattoos to J.K.Rowling… Each white card, as you saw on the photos, below the line has the name of the poem that the quote was in.

Wait, Is It Worth It?

Undoubtedly, yes! It is one of the most artistic card games, which is a mix of laughs, art, literature, some dirty words as well, but despite all that, it is endless fun. What makes it even more amazing, is that the instructions are very simple to follow, and you can play as many rounds as you want, there isn’t a rule about that!

What else are you looking for? Artistic, fun, doesn’t get boring, one of the best gifts… Isn’t this a sign?

All that glisters is not gold. It may be Bards Dispense Profanity!